On April 1, the specialists at UC Davis discovered advanced osteosarcoma in Elgin’s remaining back leg. We saw the X-ray, could clearly see the spongy cancer breaking down the margins of his bone, and were devastated. They projected that a normal dog, with all its limbs, might have a good quality life for four months at this stage.  Elgin, being a heavy mastiff and being that it was his only back leg, was looking at two months.  And based upon their concern and cautions against Elgin moving around more than to go potty and to eat, Gary and I were planning for much less; maybe one month. 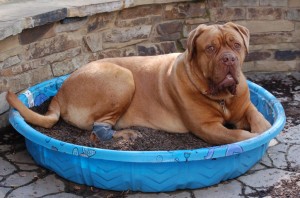 Thus we began indulging in his bucket list in earnest:  His pool is now full of sand/dirt so he can dig and scrape as much as he wants. Large femur bones come home from the butcher, frequently.   Our younger son spends a lot of time each day, laying on the floor next to wherever Elgin is resting, just petting his giant head and cuddling.  I drive him to the park every morning, so he can sniff and pee on stuff without hopping very far, and sometimes his Browndog Girlfriends come visit him.  And he gets a treat for almost everything; especially just for being Elgin. But we still won’t get him a

It is now June.  Elgin breezed through the last two months almost like nothing was wrong.  He still played, caught a rat behind the grill, chased the squirrels on the fence, still begged, still got ornery and frisky.

But we knew this streak of incredible goodness would wind down, and it seems it is doing just that.  In the past two weeks we’ve noticed that he doesn’t dig anymore in his pool, but just lays in it.  He picks and chooses which squirrels are worth chasing. He hops around the house and sits down almost as soon as he comes to a stop, not standing as much. He pants a little more and seems slightly restless.  Just today he spent significant time licking his back leg where the cancer has come back. But meanwhile, he is still bright eyed, affectionate, and defends his home when he feels the need… his guardian nature overruling his pain as he storms the front door to growl and stare down solicitors. 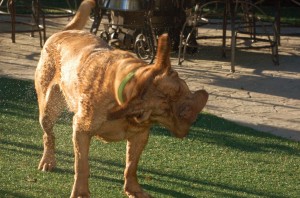 This weekend he had a good 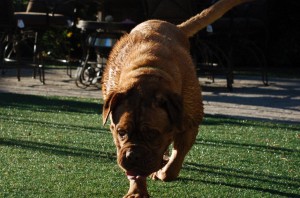 hosing-down in the backyard, as temps were over 110.  He used to play in the water, but this time I had to hold him still while I soaped him up, trying to wash away all the dirt he’s collected, wallowing in his dirt pool.  He wasn’t enjoying his bath at all.

We were discussing how we will know when the right time to say goodbye will be.  We are not ready for him to be gone from our lives.  But we are not willing for him to suffer much.  It seems that the Rainbow Bridge is looming closer every day.