We picked up Elgin this afternoon.  It was sure nice to see him again, and it was obvious he wanted outta there!  They loved him there, said he was a great patient, and that he did amazingly well with the surgery, anesthesia, and his willingness to get up and move around after surgery, especially since he’s a big dog.

They walked him out to our vehicle, and I was shocked at how well he hopped along!  He did have to sit and rest 3 times, because that back leg is not used to bearing all his weight back there like that. They supported his abdomen with a rolled-up sheet.  The ramp we got worked well, and he used it well, once we planted his front paws on it.

When we got home we put the Ruff Wear harness on him before he came out of the vehicle, and helped him down the ramp.  He went right to the grass and peed for a loooooooooooonnnnnng time.  As of tonight, he still hasn’t poo-ed. We are a little concerned, even though they assured us he may go as long as 5 days without poo-ing.

Once inside the house, he went right to his bed in front of the sliding glass door.  Then he appeared to want to go outside, so we helped him out.  He didn’t seem to have an agenda, just aimless wandering, or maybe he was just checking out his yard. Either way, we were growing concerned that he was overdoing it. The instructions they sent home with us specified he was to remain as quiet as possible, only getting up to go potty or eat/drink.  This is for two weeks.  We need to get a large pen like they use at dogshows, and set it up in the livingroom so he doesn’t attempt to wander around the house (as he’s done since he was a little puppy; he’s always “patrolled” ).

There is no dressing to change, but we do have to watch for oozing. The bruising is pretty impressive, and looks horrible.  But his eyes are bright and alert, and he doesn’t appear to be in pain. His meds have been reduced from what he was on pre-amp. Now it’s just Tramadol and Rimadyl.

It has been so nice, the support from friends, family, and strangers…. in addition to texts, emails, and FaceBook postings asking for updates on his progress, one neighbor brought us wine, and another met us in the driveway tonight with doggie treats.  We feel really surrounded by good stuff. 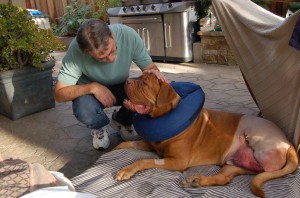 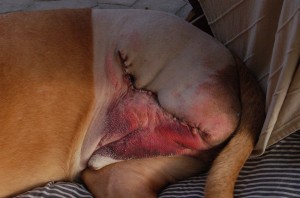 We left the house this morning at 6am to get to UC Davis for his pre-surgery appointment.  Elgin was quite hungy and begged for my toast.  I took a picture and will post it below.  He has an odd way of begging.

We met with the surgeon and she very thoroughly went over how the procedure would go.  He was pretty anxious, panting and blushing (he gets pink around his eyes when he’s all agitated). But he did really well, and handled it like a trooper. I discovered at the oncology appointment that if I have them take Elgin out of the room first, instead of us leaving him in there with the staff, it goes much better for both of us.  We left him last time, and he strained against his collar a bit and wanted to come with us.  I felt so awful.  This time, he was fine leaving with them, going for a “walk”.  I felt much better too.  Not to say I didn’t cry on the drive home, though.

We got the hallway runners today and I laid them out on the hardwood floors so he’ll have more grip when he learns to walk with 3 legs.  I think tomorrow we will recieve the baby gate to block off the stairs, and a better pad for his crate (he likes to spend time in there frequently, and opens the door with his nose.) We should also be getting the Ruff Wear Webmaster harness on Thursday.  It should be interesting, helping him learn to get around. I also took the time to vacuum and sweep…I should enjoy this brief respite from dog hair!  I was going to do “slobber patrol” but I ran out of time.  As other DDB owners can attest, slobber patrol is essential…I’ve even scrubbed slobber off the ceiling before! Another good thing (if there can be in this situation) is that his snoring isn’t rattling the whole house…. I am an audiobook narrator and frequently have to leave the booth to stomp downstairs and wake him up because his snoring is coming through on the recording.  But is was actually sad, the silence.

UC Davis has been great, calling us twice tonight to update us.  They will call again in the morning, and we’ve asked them to email us the post-op care instructions so we can be sure we have everything he’ll need and we are not scrambling to get to the pharmacy or whatever.

We had an interesting discussion at dinner tonight… how much did the leg weigh?  Joseph guessed 5lbs, Gary guessed 15-20, I am going to say 10.  When the vet assistant/nurse called to update us tonight I asked her and she said she didn’t know but was curious about that herself.  The leg was wisked away to pathology for further testing, and she said she thought they’d weigh it there.  Are we mobid or what!?

On a happier note, our neighborhood is just fantastic.  We have had so many emails, calls, texts and visits (they even brought a bottle of wine!) to see how Elgin is doing and how we are holding up.  These people are the tops!  They’ve offered their assistance, should we need to go do something and need help caring for Elgin.

We are profoundly grateful for everyone’s prayers and warm-wishes. 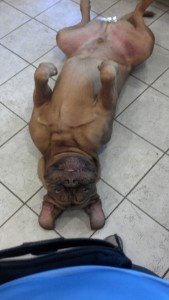 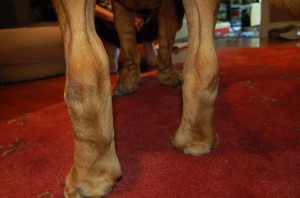 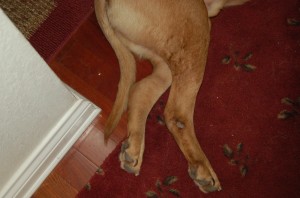 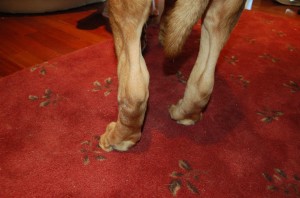