Today was Elgin’s third chemo treatment, and he also got his lungs X-rayed again to see if any mets have grown there.  The results were good – all clear!

As his treatments continue, he’s really endeared himself to some of the staff at UC Davis.  I suppose they feel fondly about alot of their patients, but it doesn’t hurt that he’s incredibly cute and unusual looking.  The breed (Dogue de Bordeaux) is still relatively rare in these parts.  At his previous treatment, the tech who came out to get him and describe his treatment plan for the day said that she was seriously considering getting a DDB for her next dog, because she’d fallen in love with Elgin, as had many of the techs in “the back”.  Today the same tech came out to greet us. She also brought him back out to us (after only 3 hours this time! Yay!) and admitted that she was still in love with him, and that she “spooned” with him, lying on the floor with him while he received his chemo.  No wonder he seems happy to go there!

We discussed with the doctor his swollen leg issue from the previous treatment, and she assured us that they did extra flushing of his veins this time, in the hopes of avoiding this happening again. We will be watching him closely to see if this works.  He was one tired tripawd when he got home, and hopped directly into his crate.  Originally it was to extort a treat from us, but once in there, he remembered how comfy and safe it feels and he ended up staying in there for a snooze. 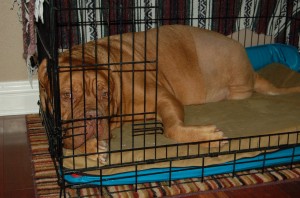 Daily, Elgin amazes us.  He’s laying more equally on his leg-less side, and now hops out of the vehicle without using the ramp. Especially when we get to UCD, he bounds out and hops immediatly to the grass.  Of course this could be because it’s a 90+ minute ride to get there and he has to pee like a racehorse once we park. Our original vet is amazed that a bulky mastiff like Elgin has done so well.  Elgin doesn’t much like going there, to our original vet, by the way.  He sits in the vehicle and just looks out and I have to ORDER him to get out.  Then he is very hesitant about going in.  I don’t think they spoon with him there.  The vet told me two weeks ago that Elgin, at 128lbs, could stand to lose 4 lbs, and that it would make getting around easier for him. So I agreed to try to reduce his intake.  Evidently we all like to give him treats more than we realized, because he GAINED 4lbs in a week’s time and I got a stern look from the vet.  Today we consulted the vet at UCD and she said his weight was fine.  He could loose a pound or two, but he was pretty much at the optimal body condition.  Whew.  I don’t feel so badly now.  But we are still cutting back on his food a little, and are more conscious of when/how we give him treats.

We are hopping every single day now, nearly a mile round trip.  He rests in the park at the bottom of the hill for about 10 minutes before he tackles the steep incline to our house.

I think he knows it’s another holiday.  I’ve taken his picture, which he loves, despite the dour look on his face. 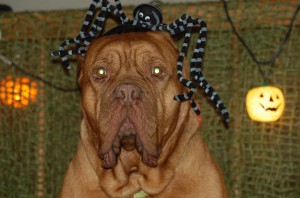 he gets lots of treats if he sits perfectly still.

The weather is coooling off, and we had our first tarantula come out and supervise my yardwork last weekend.  Elgin doesn’t give them much more than a sniff.

Now, the DEER that come around the backyard REALLY set him off, and he hops just as fast as he used to run, when he charges the fence to whuf at them.  He doesn’t bark, but does his odd coughing whuf that he’s done since he was little.

Well, I must end my novel here, and with that, we wish you all continued healing and happy times!

Now a question for all you recovering tripawds…

Elgin was doing extremely well, and still is very perky, very hungry, and moving around fantastically.  However, yesterday afternoon we noticed is right leg (the one through which the chemo was administered) was noticeably swollen.  Starting at the wrist, all the way to his elbow, it is swollen to about an inch and a half thicker in circumference than the other leg.  We tried to see if he was limping; it’s really hard to tell, when his normal gait is so humpy now without that back leg.  We asked him to walk, but he kept cavorting around, playfully!

We phoned the on-call vet at UC Davis and described what was going on, and she recommended that if his demeanor continued to be good, to monitor him overnight.  We did this. This morning he is still very perky, hungry, and again, doesn’t appear to favor it at all. Leg is still noticeably swollen, and possibly a tad bigger.

We will be phoning the vet again in a few minutes, but I wanted to put this out there to see if anyone else has had this happen… 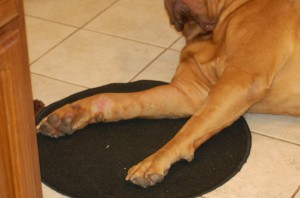 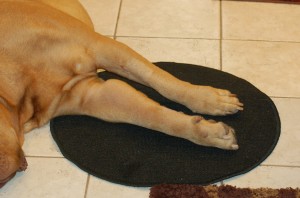 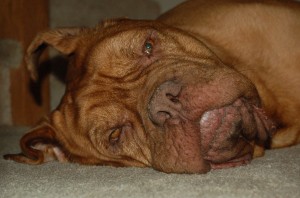 As you can see, Elgin is taking it easy after his second round of chemo. He continues to astound us and the neighborhood.  He is now pulling me around the block on our browndog walks.  He is so robust, that I have to look for physical signs that he’s wearing himself out… he blushes pink around his eyes and his tongue curls up when he pants (he always pants really hard, so I can’t use that as an indicator). He also starts to “sink” when he’s fatigued… he hops, but his back end gets lower with each hop, like he’s in quicksand.  After my workout at the gym yesterday, I can easily imagine how his leg must be burning!

This week the weather here was incredibly hot, over 100 on a couple of days, and so after our walks, I broke out his pool and let him lounge in it for a while. I think it must have felt funny on his incision because he hung his bum out over the side while he was laying in it.  It was pretty funny looking. 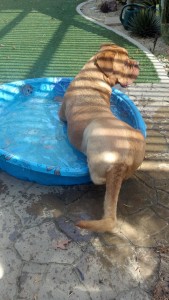 So after the second round (which took 5 hours!) he had no loss of appetite, no lethargy, and just no signs of side effects at all.  Elgin is daily returning to all of his previous mannerisms… plus a few new ones.  While he can hop up the stairs on his own, If Gary is around he will put his front paws on the step, and pause, while looking back over his shoulder with his eyes only-not turning his head, to wait for Gary to pick up his back end and put it on the step, and they make it up the stairs in this way. You can’t tell me dogs are dumb.  This one’s got it all figured out!

He sleeps with us on our bed (good reason to upgrade from a queen to a king) and instead of laying nicely parallel between us, he has begun to lay perpendicular at the end of the bed… I imagine if someone took an aerial photo, we’d look like the pie symbol. What takes the irritation (almost) out of this, is that he lays on his leg-less side.  He’s begun doing this little by little, now, after 5 weeks post-amputation.  We imagine his body was pretty tired of laying on just one side all the time. The bed must be soft enough that the pressure doesn’t hurt so much on that hip socket.

Now he’s trying it more on other, harder surfaces.  He never lays long on that side, but it’s good to see that he is apparently not in ANY pain anymore.

He is a little aprehensive when we leave him alone, and this manifests in him licking.  He has always licked his front legs when he’s nervous, and now he licks his hip/incision too.  But it’s not obsessive. Thankfully.   Poor guy, after being babysat attentively for 5 weeks, he’s uneasy when he’s left alone.  But he’s getting over it.

One last picture; here he is, in his favorite sleeping position on the stairs.  I always joked that it looked like he had a bad wreck on the stairs, but now that his leg is missing, it’s even funnier! (Yes, I’ve been accused of having a warped sense of humor… I guess it’s true. 🙂 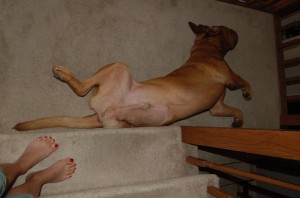