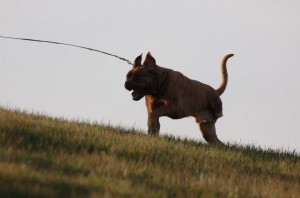 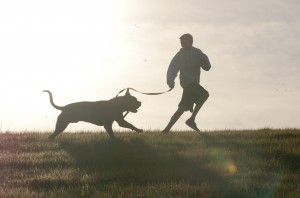 It was a beautiful day earlier this month, with temperatures in the 70’s. Elgin got lucky and my son took him out on the hill behind our house for a little romp. He of course had his daily “Browndog Hop” early this morning (he loves his girlfriends!) but to get two outings in one day is pretty rare.

He is really full of pep and is a role model for us humans, when we might feel a little tired, sore, or down… just watching him living life as if nothing is amiss, is quite profound.

We had a superbowl party, with 20+ friends and neighbors.  We allowed Elgin in the house, but watched him like a hawk, as he is prone to pushing his big slobbery face into people’s crotches, hands and any plates in reach, leaving a trail of shoestrings in his wake. Everyone behaved themselves, and no slobbers went flinging or dripping, until we put him outside and gave him some treats. Then he made a sideshow of standing outside the glass doors, watching the people inside, while his drool dripped down, almost reaching the ground.  “Gross but fascinating” they said. (I thought I heard bets being placed on how long the drool would get before it dropped off.)

He continues to wear his “elbow saver” on his back leg so that the hygroma doesn’t come back. However we took it off last Friday night and forgot to put it on in the morning. All of Saturday he was outside in the good weather while we did gardening and worked in the garage.  That was all it took for him to open up a hole on that hygroma and swell it up, all puffy and red.  It was oozing, and so I hotpacked it and put Neosporin on it, then a gauze pad and the elbow saver.  It seems to have worked, because the hygroma is looking much better now.

This past week was worrisome, though. On tuesday he started to slobber copiously around noon, and this continued until early evening.  I put him outside in case he was going to be sick, but he just lay outside the door, drooling all over his front legs and the patio.  His appetite was good, he was drinking normally, and wasn’t lethargic, so I continued to observe him.  It abated at night, and  hasn’t happened again.  Then Wednesday, he began panting more than usual.  He has always panted loudly at odd times, but this was more pronounced, heavier panting.  He also was not completing our normal walk without stopping to lay down and rest towards the end.

Thinking that maybe he’d put on a few pounds and that was what was causing the panting, and resting during his walks,  I took him to the vet and weighed him.  He was 128; not much of an increase, a pound maybe two.  The vet also felt his lymph nodes, which were not enlarged.  He suggested that I administer Rimadyl, to address the panting, which could have been a side effect of pain of some sort.  We are not due to go back to UC Davis for a recheck for another month yet, but I decided to watch Elgin over this weekend, and if he still exhibited these behaviors, I had planned on taking him there next week. 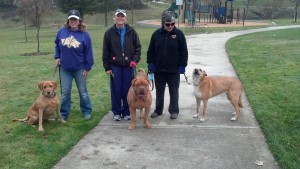 Update:  It’s Saturday night, and Elgin is back to his normal self.  His panting has subsided, his drooling episode never recurred, and he has been perkier and going for walks/hops (although it seems he’s chosen to make his rest toward the end of the walk a habitual thing.) The picture at left is of Elgin and his girlfriends, who, together go “Browndoggin” most weekday mornings.

So my worries are relieved.  I’m not going to administer the Rimadyl, as my husband and I agree that we don’t want to embark on that bandwagon.  It’s so hard to know if it’s just a “bad day” or if it’s something more.  We are going to pay closer attention to his diet–try to take off those couple of pounds he put on, and take into account that he will have good days and bad.  Just like the rest of us!

6 thoughts on “Nice day for a run on the hill…”