So Elgin is doing well, in the face of his recent bad news.  The fact that the osteosarcoma has come back in his remaining back leg does not give him a second thought.  Dogs are like that.  He’s not laying still in one spot all day, worrying because he’s got cancer and it hurts.  He’s laying in the sun, rolling on the grass, got to bark at some cows that got loose behind our house, and this week we indulged him in his passion for dirt and digging, as best we could.

I pulled out his wading pool and filled it with sand.

With how much Elgin slobbers, I’m afraid we’ll have a giant cement hockey puck before long.

Tonight, after he had dug in his pool this afternoon, he was weak and it was a bit difficult for him to rise and stand.  I gave him 100mg Rimadyl instead of 50 and he seems better.

One of his “Browndog” girlfriends (Mona) from the neighborhood came over last week for the last time.  They get so excited when they see each other that it’s like watching a couple of moose in rutting season.  I just don’t think it’s prudent to let him engage like this, so it was a short farewell visit.  However, Mona’s owner will still come over and visit.  She brought shrimp for him last week.  Unfortunately all it did was generate a lot of slobber as he mouthed it, and even though he tried several times, Elgin just couldn’t eat it.  I guess it must be sautéed in butter and garlic first.

So how do we know when it’s time to say goodbye?  My husband and I have talked about this quite a bit.  The vets at UC Davis were astonished that he was able to get around, with how much the cancer had spread.  They recommend he only get up to go potty and eat/drink.  If I understand things, the average time left for a dog with the metastasized cancer in one of two legs on the same end, is about 4 months; when the cancer comes back in that sole supporting leg, it’s half the time. Our older son drove 3 hours home from college to say goodbye to Elgin this weekend. We talked about the most important thing: Elgin’s quality of life. He won’t be happy being sedated.  We also don’t want him in too much pain, obviously.  And again, obviously, we don’t want to see him fracture that back leg, which is quite possible, since the cancer cells replace bone cells and are very aggressive.  So we will restrict his robust activities.  We will administer pain meds until the pain breaks through too much, he’s suffering, and adding more meds is unfeasible.  And we will pray he doesn’t fracture it.

We want all of you on this forum, and those of you who follow this blog, to know that we appreciate all of the warm wishes and support you’ve given us on this journey.  We humans are trying not to obsess over every movement, every groan, and every misstep Elgin takes. Elgin is obviously enjoying this spring, and we are trying to follow his example. 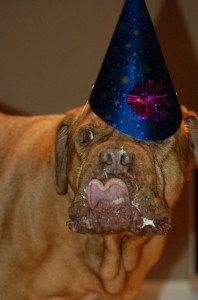 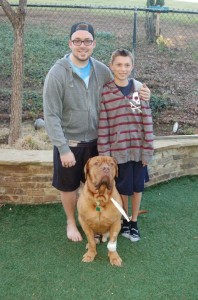