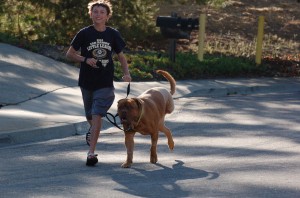 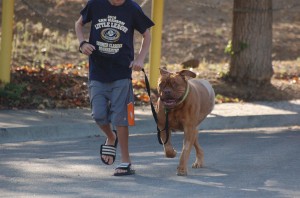 One week post-chemo, stitches out…

Elgin handled his first chemo treatment very well.  He was a little lethargic and had little to no appetite for a day, but otherwise he was fine.  He continues to heal and make his way back to how he was before the amputation (or before the cancer caused him so much pain).  He is the happiest when he gets to go out on Browndogs.  For the past two weeks I would take him 3 houses down to visit his girlfriend, and then home we would hop, because I didn’t want him to overdo it.  Overdo it? HA!

Towards the end of last week I drove him down our big hill, to the park at the bottom of the street.  One of his favorite things is to pee on and walk through the big, brushy ornamental grasses planted around the perimeter of the park.  From the expression on his face, it seems he likes how it feels when they rub his face, chest and belly.( I can picture him in a pith helmet and canteen slung over his shoulder.)  I knew he really wanted to go down there, but we didn’t want to hop him there because we didn’t think he could hop back up our steep hill.  Boy, did he enjoy the park that day!  He hopped all around it, peed until he couldn’t squeeze out another drop, and laid down, partly in protes,t when we tried to go back to the vehicle to come home.  So I let him lay there for probably 15-20 minutes and then loaded him up and drove back home.

Early Saturday morningI hopped him 3 doors down, and then we hopped two more houses.  I figured this would be a long process, to work him up to getting to the park and home under his own power.  Well…… Elgin doesn’t know he’s a tripawd, evidently.  He has discovered that it is much easier on him to RUN than to walk.  Now he hurries everywhere. Even in the house.  Yesterday, I decided that since he seems so robust and eager to go, go, go, I’d hop him down the hill to the park and we’d just take our time getting home, stopping to rest whenever he needed to.  He PULLED me all the way down the hill, thoroughly enjoyed sniffing and peeing and wandering the park, and then he PULLED me back up the hill!  Unbelievable.  We did it again today, with one of his Browndog girlfriends, and same story; he PULLED me down the hill, PULLED me around the park like a kite at the end of a string,  PULLED me up the hill, AND PULLED ME ALMOST UNDERNEATH A PARKED CAR, CHASING A CAT!  Does this dog know he’s missing a leg?!  NO!  I had to stifle a giggle tho, at one point he walked on the wrong side of a tree and tried to lift his one leg to pee…. he only has the one, and he almost fell over.

When we got home I checked him over for injuries (he really dug in after that cat, and with only one remaining back leg, I was worried about him hurting that one.) and found a scrape/tear between his pads that was bleeding a little.  Since we had to go to the local vet for a CBC, I asked for something for his foot too. I was concerned that the chemo and his compromised immune system might turn it into an infection.  So we came home with an antibiotic spray.  This was the first time our local vet had seen him since his initial diagnosis.  The vet and his staff all turned out to see how Elgin was doing.  They were all smiles and laughter at how gung-ho he is now!

We are still watching him almost all the time, because he likes to lick his incision.  But hopefully in another week it will be sufficiently healed that the danger will be over.  His fur is growing back, and he seems generally much perkier than a week ago. Last night he was chasing me around the house playing hide-n-seek, and was mock-wrestling with my husband.  We are very pleased with his outlook.  I hope the other tripawds we’ve met who are on Elgin’s timeline, are doing as well.  Fenway?  Jack? How you guys doing?