Well, after two weeks of babysitting 24/7, sleeping on the couch to make sure he didn’t lick open his sutures, get stuck behind a chair or couch, occasionally hand-feeding him, and generally overanalyzing every sneeze, blink, twitch, or cough, we finally hit a milestone:  the stitches are out and he had his first chemo treatment today.

We had been trying to let him get around more, and let people come visit him.  I was really concerned early last week because he seemed so apathetic.  Then he went 24 hours without drinking anything, and just generally seemed as if he’d given up.  His appetite was fair, at best, hence the hand-feeding. The only thing that seemed to perk him up was letting him outside on his leash, to hop down the sidewalk.  We did this late at night in the darkness, to lessen the possibility of distractions he might suddenly take off after, as well as it was cooler than the high 90’s temps we’ve had most days.

We worried also about his overal body soreness, because he seemed very hesitant laying down and getting up.  Rather stiff and shaky.  At the same time, we tapered him completely off his pain meds.  Not knowing if some of the side effects were from the meds and not the pain, we didn’t give in and administer any more doses. It was so sad to see him so listless.

Then, yesterday, a breakthrough! One of the neighbors came over for tea and to see how he was coming along.  When she came in the front door, he pupped up and ran to her, just like he used to!  Then he actually POUNCED on one of his toys!  This episode lasted less than 10 seconds, but it was REALLY good to see that spark.

So today we loaded him up and drove him to UC Davis for his 3-hour chemo treatment. He is doing really well and even managed for the first time, to beg like he used to!  “Belly Up!” has never been so wonderful!  His appetite seems better than before, as evidenced by the fact that he’s actually begging for food.

We are prepared for the nausea and possible diarrhea (they gave us meds for it when they gave him back to us today), if it happens, but for now we are pretty happy with how good he appears to be feeling.

His next chemo treatment will be in three weeks. He’ll have a total of 6 chemo treatments, with another lung X-ray after the third treatment, to check for metastases.  Lord willing, there will be none. We forgot to ask how much the leg weighed, but I plan on emailing the oncologist about some other questions, and will ask then.  I’ll share what the result is. 🙂

I hope our new Tripawds friends, Fenway, and the others who had their aputations around the same time as Elgin, are doing well too.

Here is a cell-phone pic of Elgin going belly-up for our burritos. 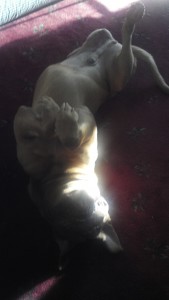 7 thoughts on “First chemo treatment and stitches out!”