Elgin is doing well.  I continue to ice his incision a couple of times a day, and while I’m down there, I pick at his grody scabs from the razor burn, which covered almost all of his left bun.  They come off easily and I find that he’s easier to look at when that scabby patch is gone. Makes me wanna puke, tho.

Yesterday was a little tough on us both, as he is becoming more restless and mobile (or “clingy” as my husband, Gary, says, because it amounts to Elgin trying to find me, wherever I am in the house).  I thought I could get away with not putting up his pen in the living room, and simply putting on his inflatable donut, letting him have free access to the ground floor of the house.  He had been sneaking licks in and irritating his incision.  Up I went to the second floor, to start my work day. I heard him hopping around down there, and then all was quiet.  I thought, “COOL.  I can actually make some good progress on this book!” After about 10 minutes I heard noises down there and when I checked on him, discovered he can lick his incision AROUND that donut!  Dogue de Bordeauxs are very long-bodied, and it turns out in his favor, that he can reach his hindquarters.

So I put on the GINORMOUS satellite dish E-collar he was sent home in.  I went back upstairs, and continued up and down the stairs the rest of the afternoon, as he proceeded to get stuck in every doorway, catch every corner, and crash into every chair we own, with that vast expanse of plastic…. it reminded me of an object ‘d arte by Cristo! So I gave up and stayed downstairs with him, and when he would get up, I would get up and walk with him, to hold the edges of the collar so he could squeeze past the couch, or make it around the kitchen.

I did try boxer shorts, but I picked the wrong pair.  (I’m not accustomed to pilfering my husband’s underwear drawer to find something for the dog to wear!) When I put them on him, Elgin hopped right out of them, in addition to them not being very comfortable. My frustration was getting the better of me. I am not willing to spend my day walking around the house holding the edges of an E-collar! Nor do I think Elgin wants this.  So when Gary came home last night, I went to the gym.  When I got home (in a much better mood!) he had let Elgin outside to enjoy the night air without ANY collar, and Gary could still see him through the doorway to supervise the licking thing.

This morning, Gary picked a really good pair of boxers and put them on Elgin. Voila! They fit him much better, they didn’t fall down, and Elgin can’t lick the incision!  I actually got a lot of work done today, until the landscapers came and started up their leaf blowers and lawnmowers (which means a mandatory break for my recording, and a chance to blog).

I’ve begun to taper his Tramadol, and by Friday, he is to have stopped all pain meds.  I think this will be good, because he was a little weird sometimes, and we’re chalking it up to the meds. 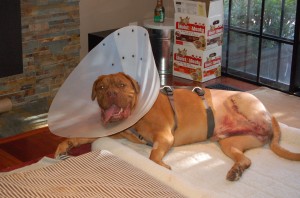 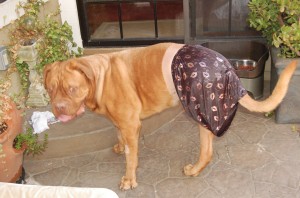