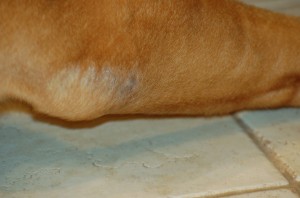 This is a picture of a normal callous that formed on elgin’s elbow after he had his amputation.  What a spoilt doggie he was; who ever heard of a mastiff without callouses on his pressure points!?  But when he got his leg amputuated, he preferred to lie on cool, hard surfaces, and used those pressure points more heavily than ever, as his balance was compromised.

A very large callous developed on his back hock, and more quickly than the front elbow, because he drags it along the ground with force, to push up his back end to stand up.

Almost two weeks ago we noticed how big his callous was on his back leg.  Wow, we thought, that’s really one heavy-duty callous!  Well, this weekend it began to weep pus.  He’d gotten an infection in that callous and it had been festering.  He never licked it, never showed that he was in any pain at all.  Being that he only has this one back leg, we rushed him to our local vet.

Here’s a picture of that bad callous:

Our vet proposed a laser treatment to kill the bacteria, as he didn’t want to wrap the limb, possibly causing more irritation.We are cleaning the site with peroxide and he’s getting antibiotics twice a day. The laser treatments happen every other day for two weeks.  I get to squeeze this in between carpool, work, and the general hecic schedule around here.  Thankfully the vet is only 2 miles away! This morning they allowed me to take a picture of the process.  Elgin is becoming more comfortable here at our local vet; he no longer stays in the vehicle until I drag him out, and he doesn’t tremble and pull against the leash to get away.   Someone must be spooning with him there!  (see previous blog post)Here are a couple of pictures of the laser treatment:  It’s painless and relatively inexpensive (for once!)So, in conclusion, watch those callouses! 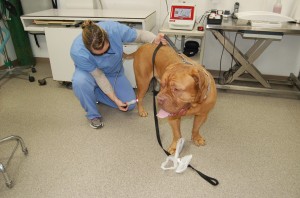 23 thoughts on “Watch those callouses!”